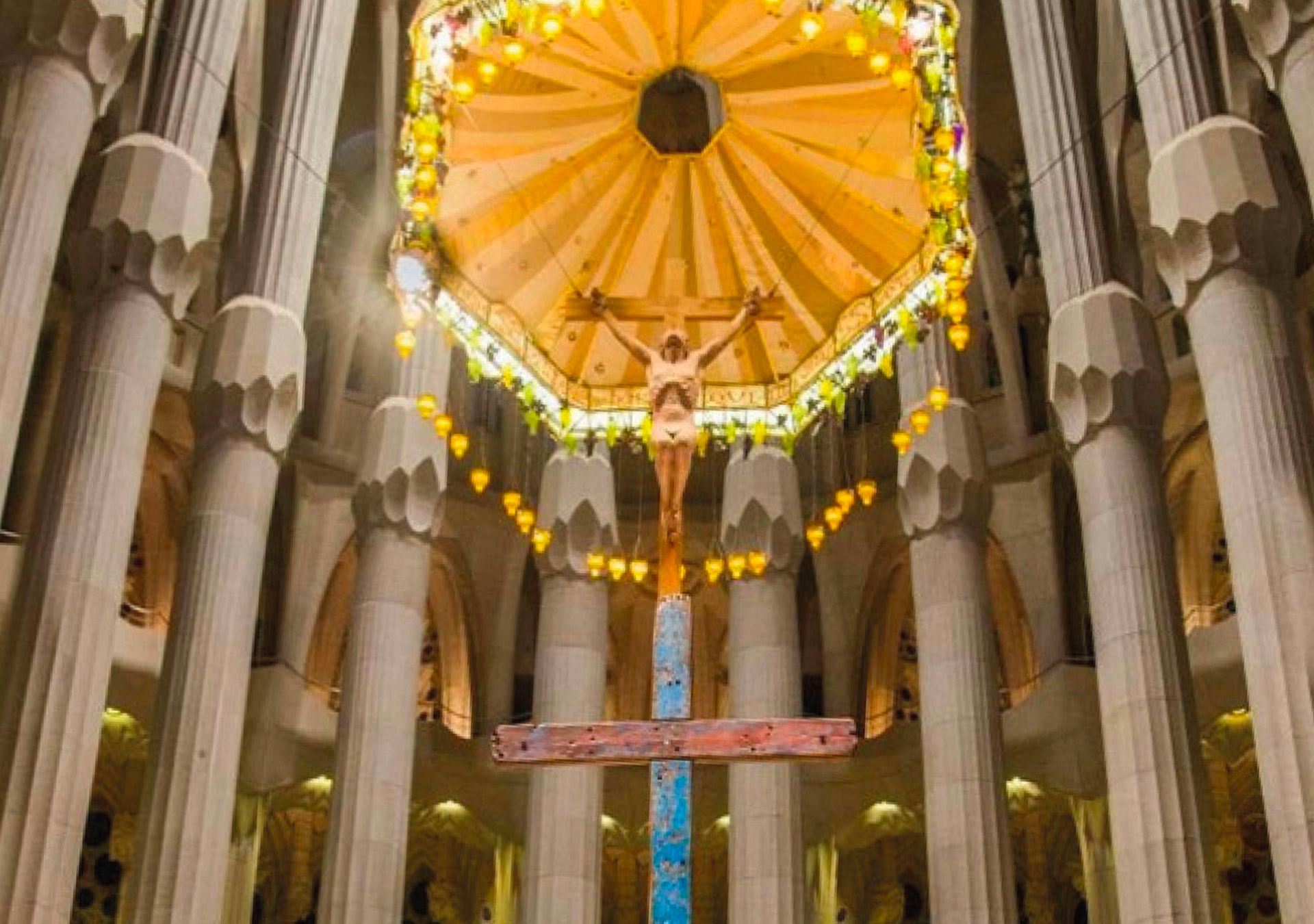 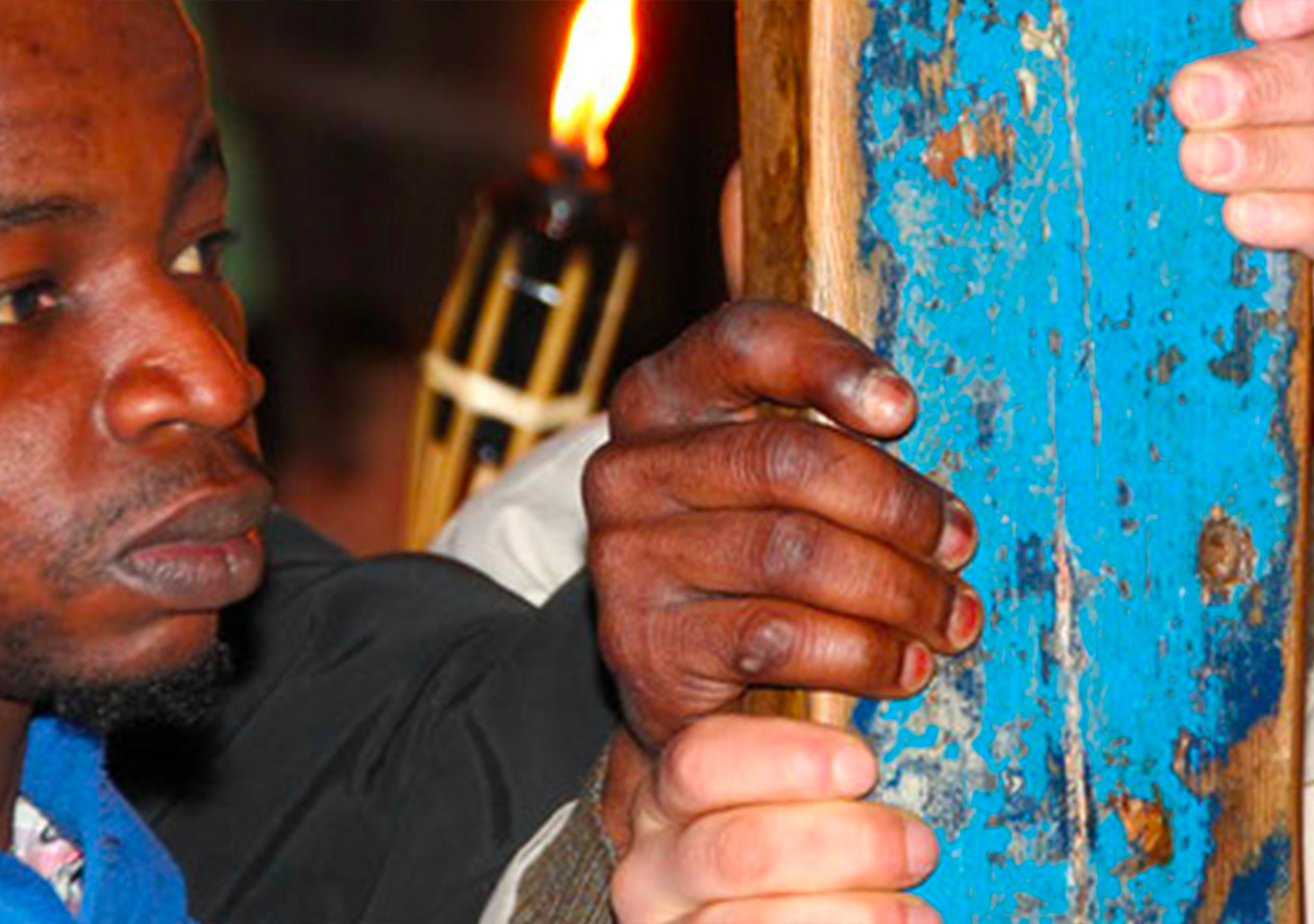 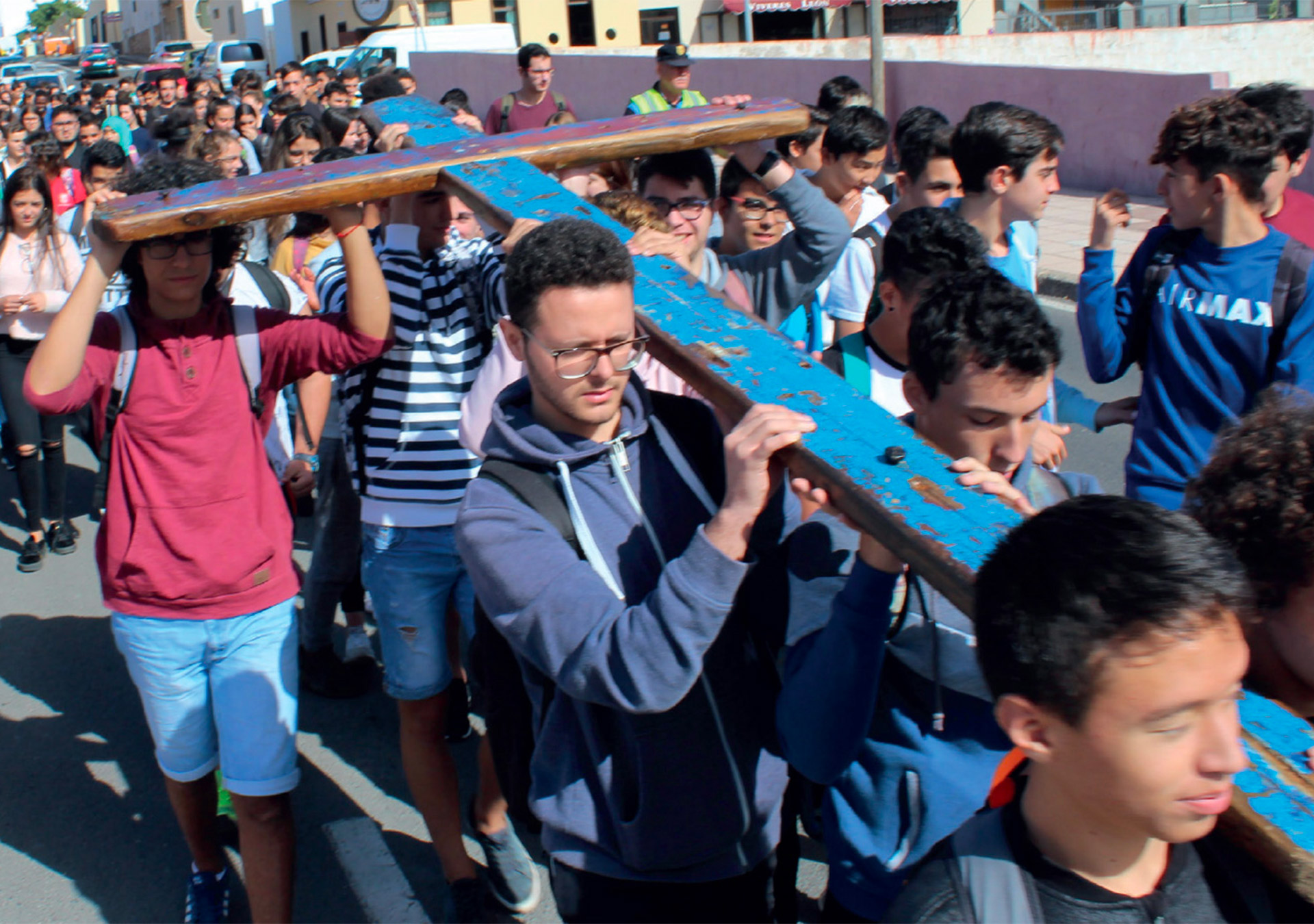 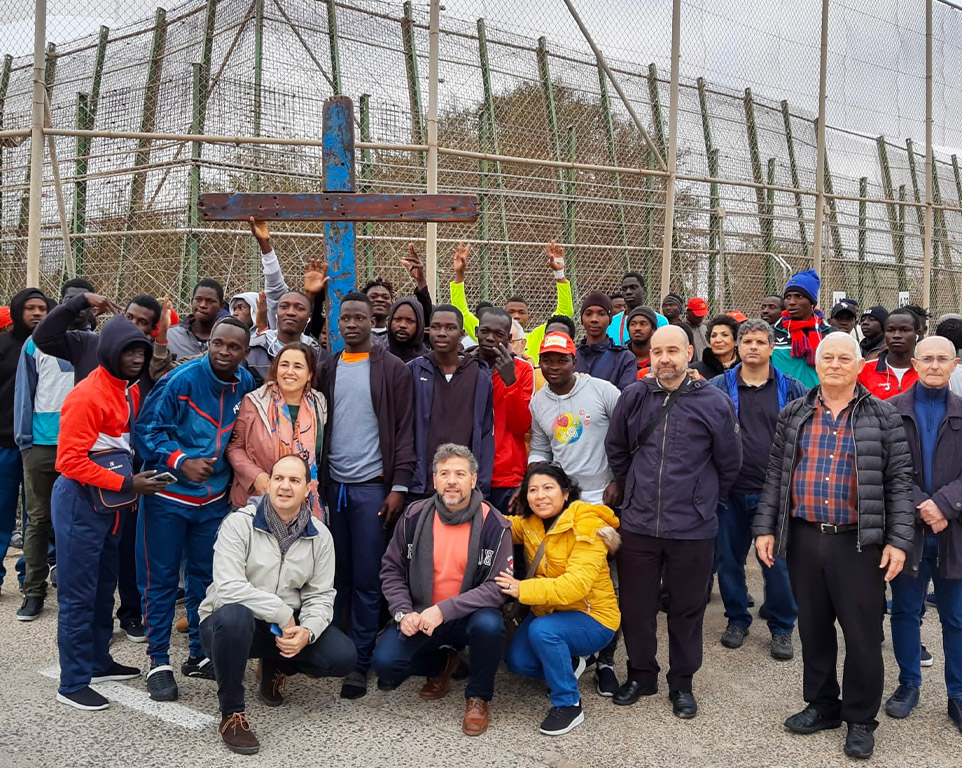 The journey of the Lampedusa Cross

The spiritual dimension of each human being and his or her dignity are inscribed in the wood of the Cross. Its journey is a witness to the spirit of women, children and men on the run. Because nobody can forget.

THE HISTORY OF THE CROSS

Poor wooden boards: it is the tragic humility of a boat stranded on the coast of Lampedusa. Two boards 2 meters and 60 centimeters high, 25 kilos of pain. It is the Cross of Lampedusa,   symbol of the odyssey of migrants: it has never stopped since April 9, 2014, when Pope Francis blessed it in the Vatican. From that day he travels from hand to hand, generates encounters and solidarity between peoples of various cultures and religions. Entrusted to a spontaneous relay that has accompanied her in over 2400 churches, shrines, places of worship in Europe and in the world. During the pandemic, the Cross was kept in the parish of the Trinitarian fathers in Algeciras, a religious community that runs a reception center for excluded people, most of them migrants. As soon as it was possible, the journey resumed and in October 2021 it arrived in Santiago de Compostela. It is planned to make the Cross travel to the border between Mexico and the United States and to other places in the world where we can reflect on the theme of the dignity of migrants.

At each stage, the Cross leaves - as a reminder of their passage - a small cross, also made with the wood of the sunken boats, to each local community. A seed of conscience , a testimony, a warning to consider that this has been and this is and that we cannot not know.

Ennio Morricone was inspired by the Croce di Lampedusa, who wrote and donated the composition "La voce dei sommersi" to the Foundation.

A cross from Lampedusa, always made with the wood of the barges, was requested by British Museum , which introduced it to its permanent exhibition collection.

To request the Croce di Lampedusa and welcome it in your diocese in Italy and abroad write to casaspiritoarti@gmail.com

The referent of the Foundation for the journey of the Lampedusa Cross in Spain and abroad is Graziella (Iosella) Cuccu.

«The pilgrimage of Lampedusa Cross goes beyond a strictly religious concept and must serve us to reflect and send a social message: millions of people who have worshiped the cross in Spain even today, after some time, bear the indelible sign that the cross has left in their consciences and in their hearts. This cross, built with simple and poor wood, is full of feelings and hope for the future. Hope gained step by step, often leaving life in desolate areas, in endless deserts, in war zones, and finally in a sea that is sometimes sweet but sometimes too often hostile that has swallowed millions of lives. All for reaching what is called "civilization».

«Among the many places and events held in Spain with the cross, I would like to share with you those who have impressed me the most: The cross began its pilgrimage to Spain from the Sagrada Familia in Barcelona. 5,000 people participated with great enthusiasm. Great was the emotion especially of the young people who participated in the via crucis inside the basilica carrying the cross on their shoulders, headed by the then archbishop Omella (today Cardinal). The pilgrimage of the cross continued by meeting the women detained of the female prison in Barcelona; the inmates who attended the mass were very excited: kneeling on the ground and while embracing it, they were asking and begging for the help of the cross, a cross created from that wood that they know very well since many of them are immigrants and arrived in Spain in boats equal to those of Lampedusa that crash against the rocks or that get safely to the island, depeding on what migrant people's fortune is». 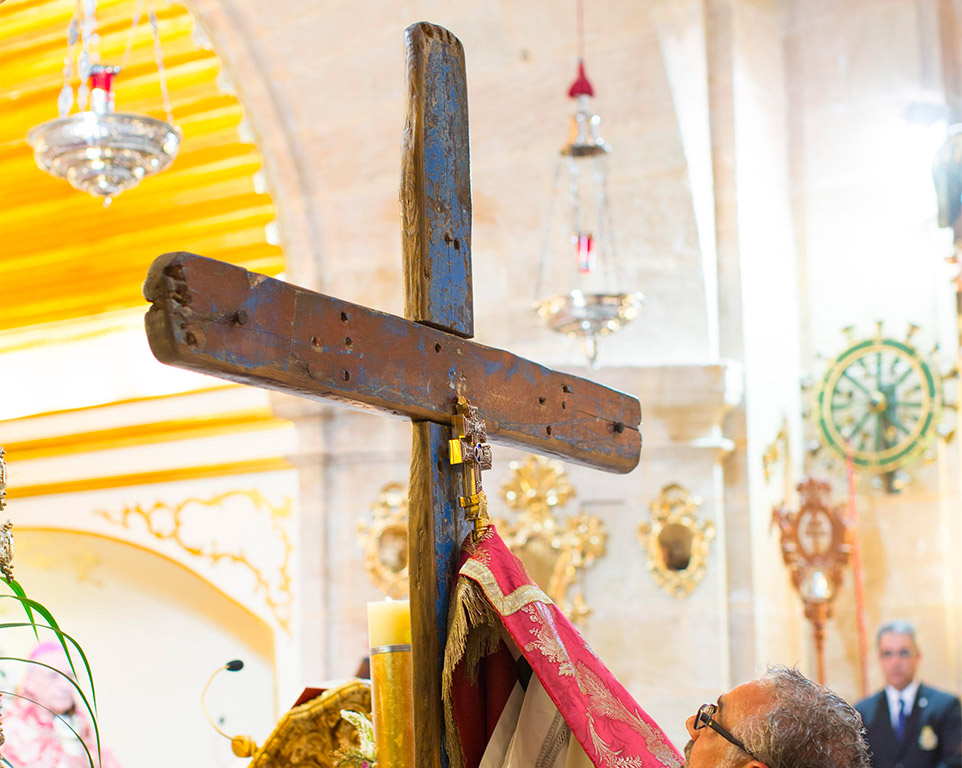 «I cannot forget when the cross arrived in Caravaca della Cruz, Holy City: it was welcomed by Cardinal Hellin, in the sanctuary where the most holy Cross of Caravaca is kept, which contains the "Lignum Crucis"; in addition to the small cross of Saint Teresa of Avila, no other cross had ever entered the sanctuary. The cardinal asked that the Cross of Caravaca be superimposed on the cross of Lampedusa. The two crosses joined and in the great silence of the Sanctuary the cardinal pronounced the words "All crosses are a single cross, all crosses that are of gold or poor wood like that of Lampedusa remind us of the sacrifice that God made for us by giving us the life of his only and beloved son for our salvation”. In the great silence, only the cries of those who participate were heard, almost as if a wave of love for one's neighbor lightened all those present inside. Everyone's hearts opened and the crying became a liberating cry». 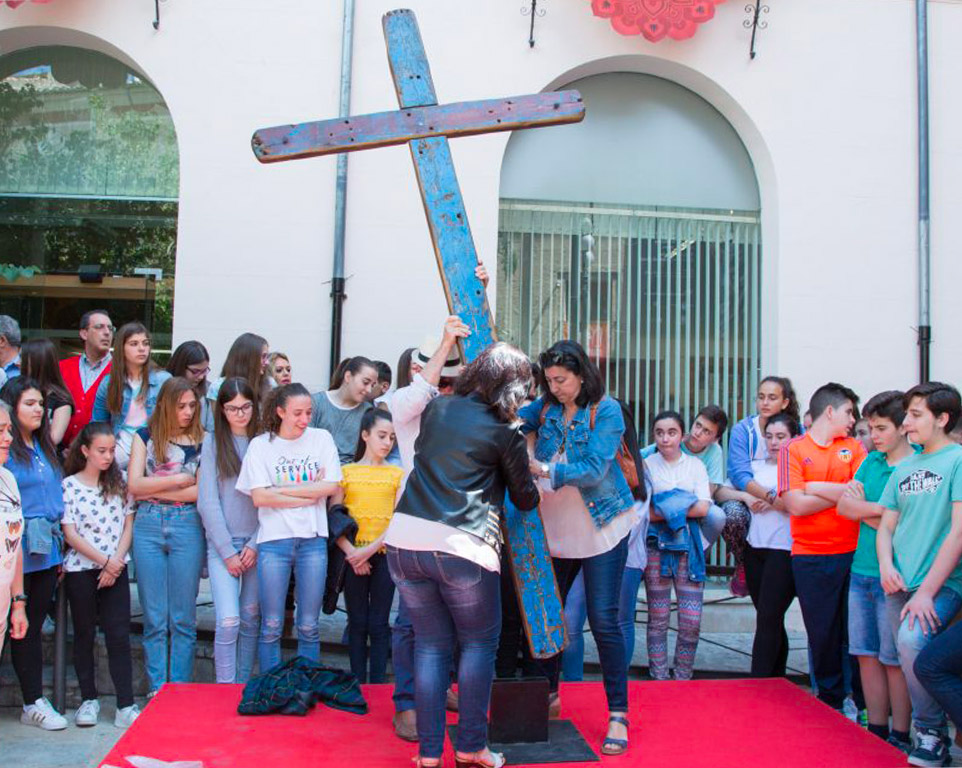 «How can I forget the day when 15 thousand pilgrims took their crosses to Javier (Navarre) so that they could approach them to the Lampedusa Cross. The moment when the Archbishop of Pamplona passed the Lampedusa Cross to the Bishop of Sant Sebastián was very moving: on their knees on either side of the cross, they prayed together for brotherhood.». 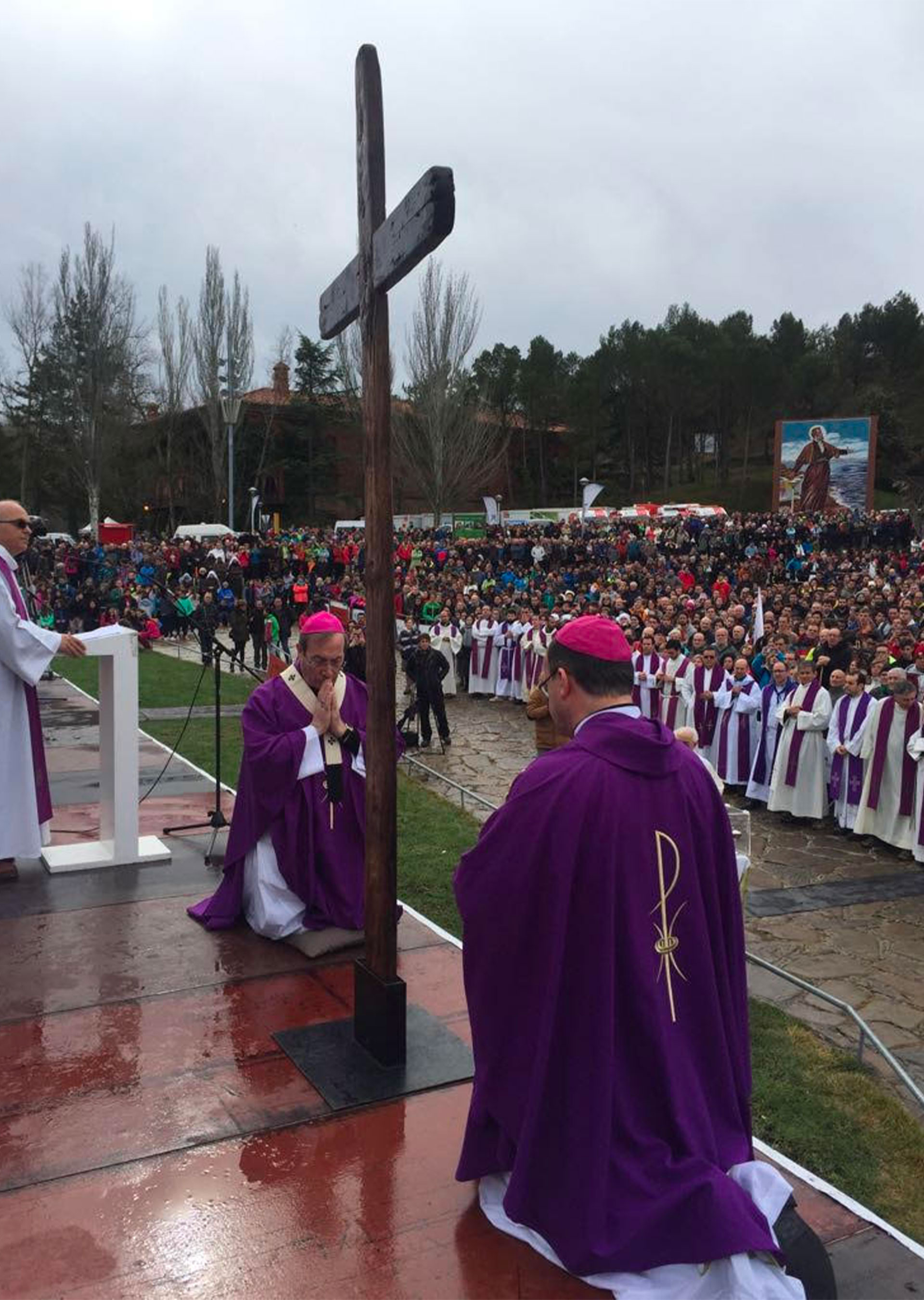 «Another special day was the one of the pilgrimage of the Cross to Aranzazu (San Sebastian). The cross was accompanied by the bishop and by thousands of pilgrims in a procession that lasted hours: they passed the Cross, distributing the weight of that pain it represents. In my mind the memory of a lady and the words she addressed to me is still vivid: "I brought it praying not only for those who come from other countries but also for us who, lucky enough to live a worthy life, have forgotten that everything it may be, that everything can change, that love for neighbor must not be lacking, that it is more useful to us than to those who arrive and experienced desperation for themselves and that we are all children of the same father"». 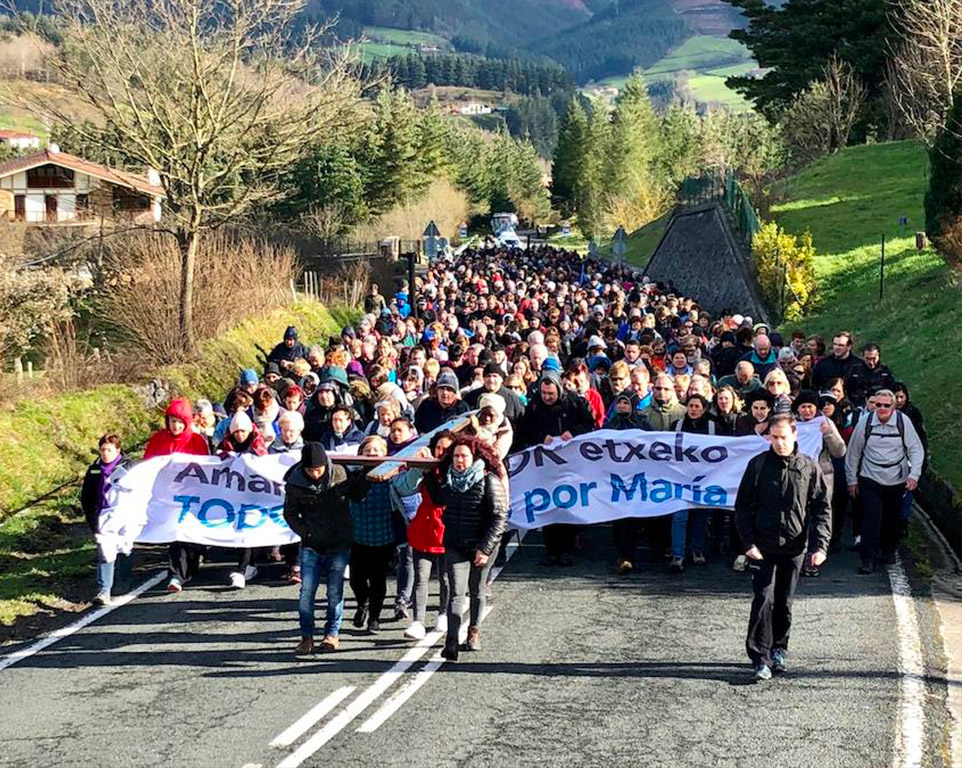 «In addition, the Lampedusa Cross visited three of its "twin" migratory ports in the Mediterranean Sea: Arinaga and Arguineguin, beaches of Gran Canaria, and Melilla. In this last stage, it was the migrants from the reception center who carried the Cross on their shoulders and carried her in procession. Each of them wanted to remember a companion who died during the crossing, putting up a sign on their back with the name of those who could not even receive a funeral: a river of tears in common to all, almost as if the Acheron found a way out of the their eyes, while on their shoulders the names of those who had already crossed it stood out. The same military pilot in charge of its transport by air from the peninsula vented by declaring that that was one of the most difficult flights of his career: he felt the weight of lives clinging to the meaning of the Lampedusa Cross, as well as that of the souls that had not make it and that had found voice in the journey of the Cross. Received by an honor guard made up of soldiers who, like "Piero" (a reference to a traditional italian song, ed.), hate war: they therefore decided to welcome it with lowered weapons, declaring a spiritual surrender in the face of the powerful message that it carries with itself.».

It has returned to Huelva starting a tour of schools, a magnificent work of educators redefining the meaning that the cross contains so that the youngest could know and feel a reality outside of their comfort. The mornings were filled with the youngest around the cross. San Vicente de Paul - Daughters of Charity -, Mary Immaculate - HH de la Cruz, Santa María de Gracias - Agustinas -, Funcadia - Jesuitas-,...many boys and girls, adolescents and young people, hundreds, taking turns to receive a teaching between catechesis and the humanities, between today and tomorrow, between faith and common sense.
All for a better world. 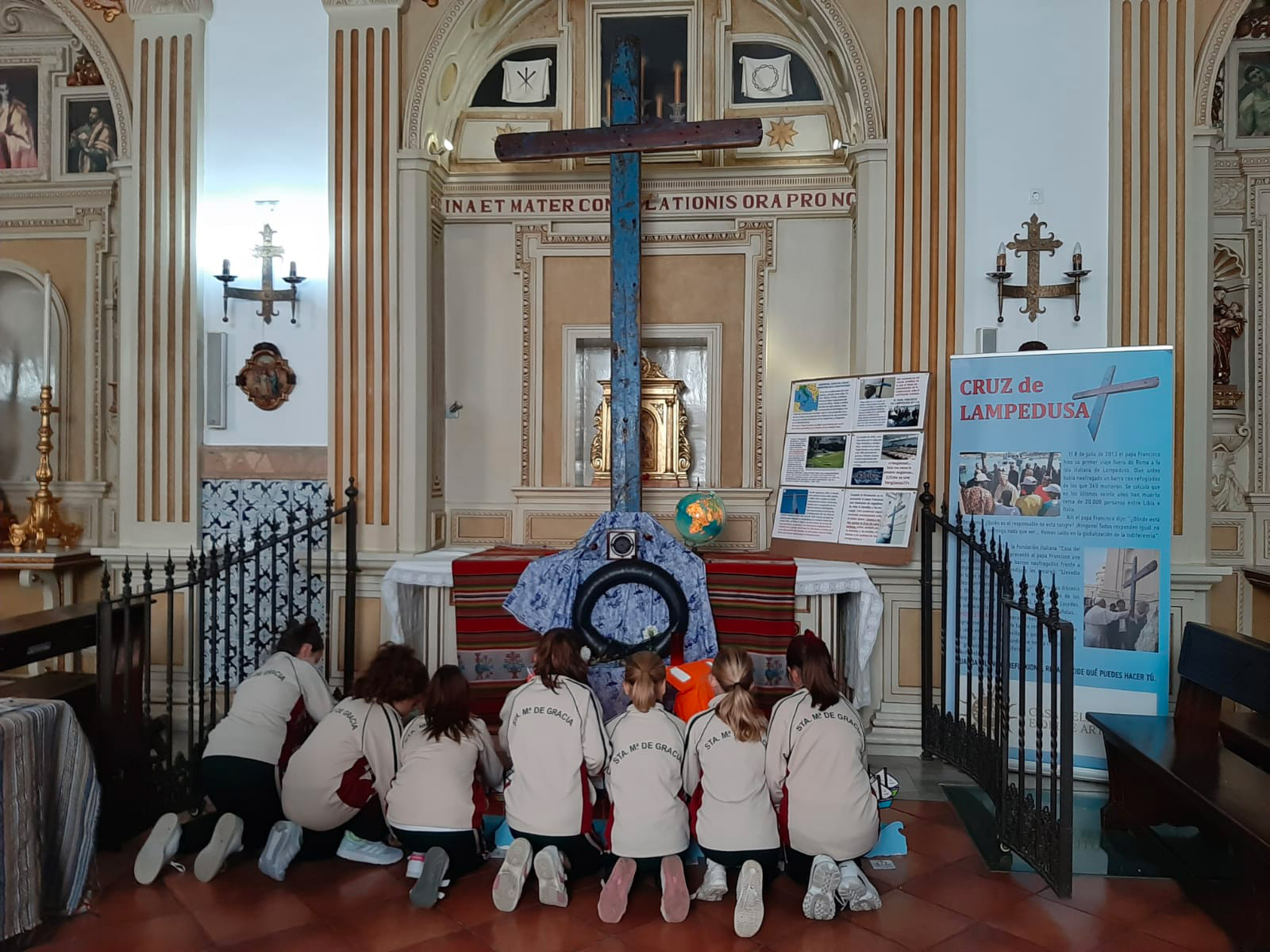 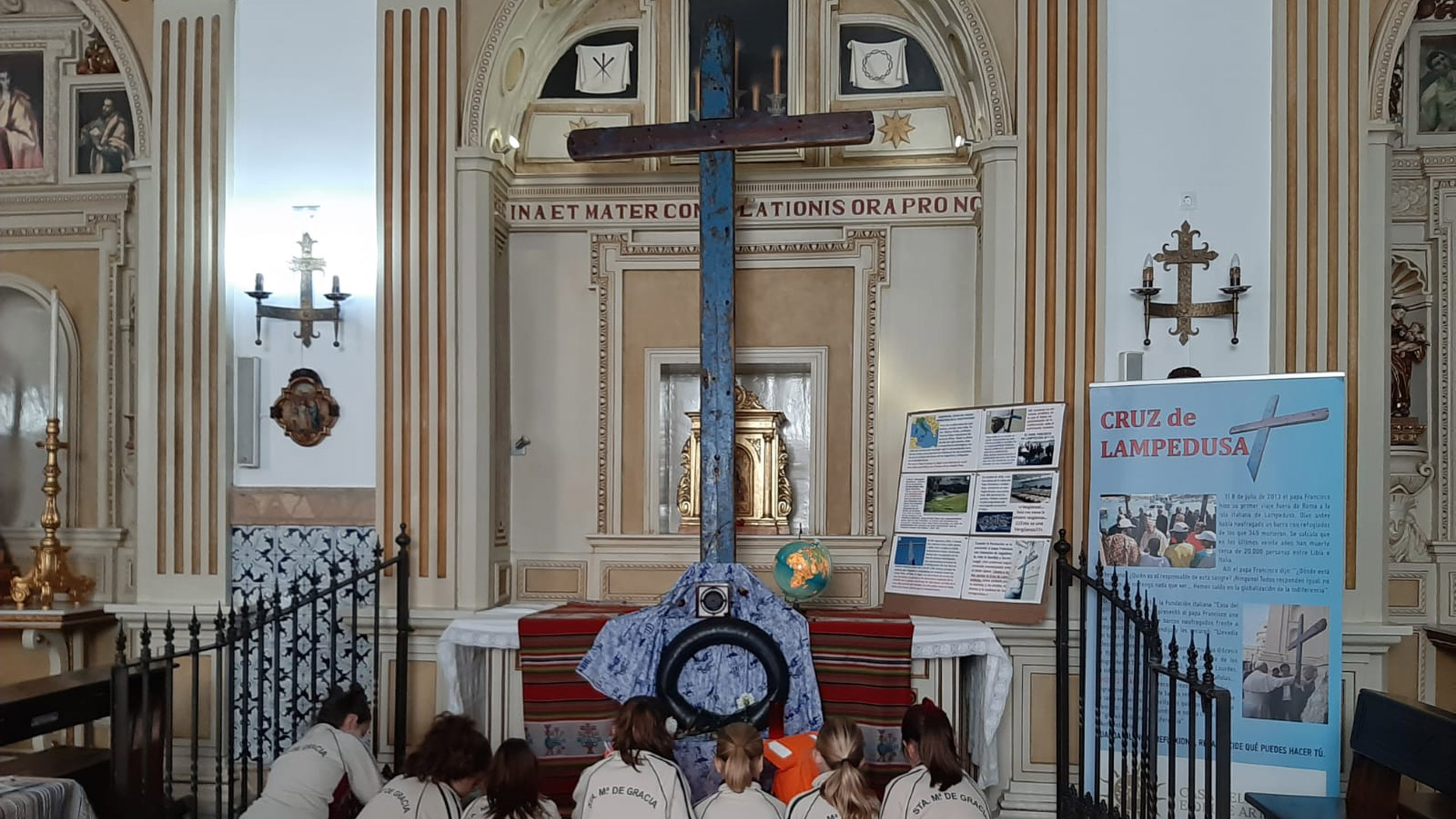 ”The Church is therefore called to remind everyone that it is not only a question of social or migratory issues but of human beings, of brothers and sisters who today are the symbol of all the discarded people of globalized society. It is called to testify that for God no one is 'foreigner' or 'excluded'. It is called to awaken consciences dozing in indifference to the reality of the Mediterranean Sea which has become a cemetery for many, too many.“ 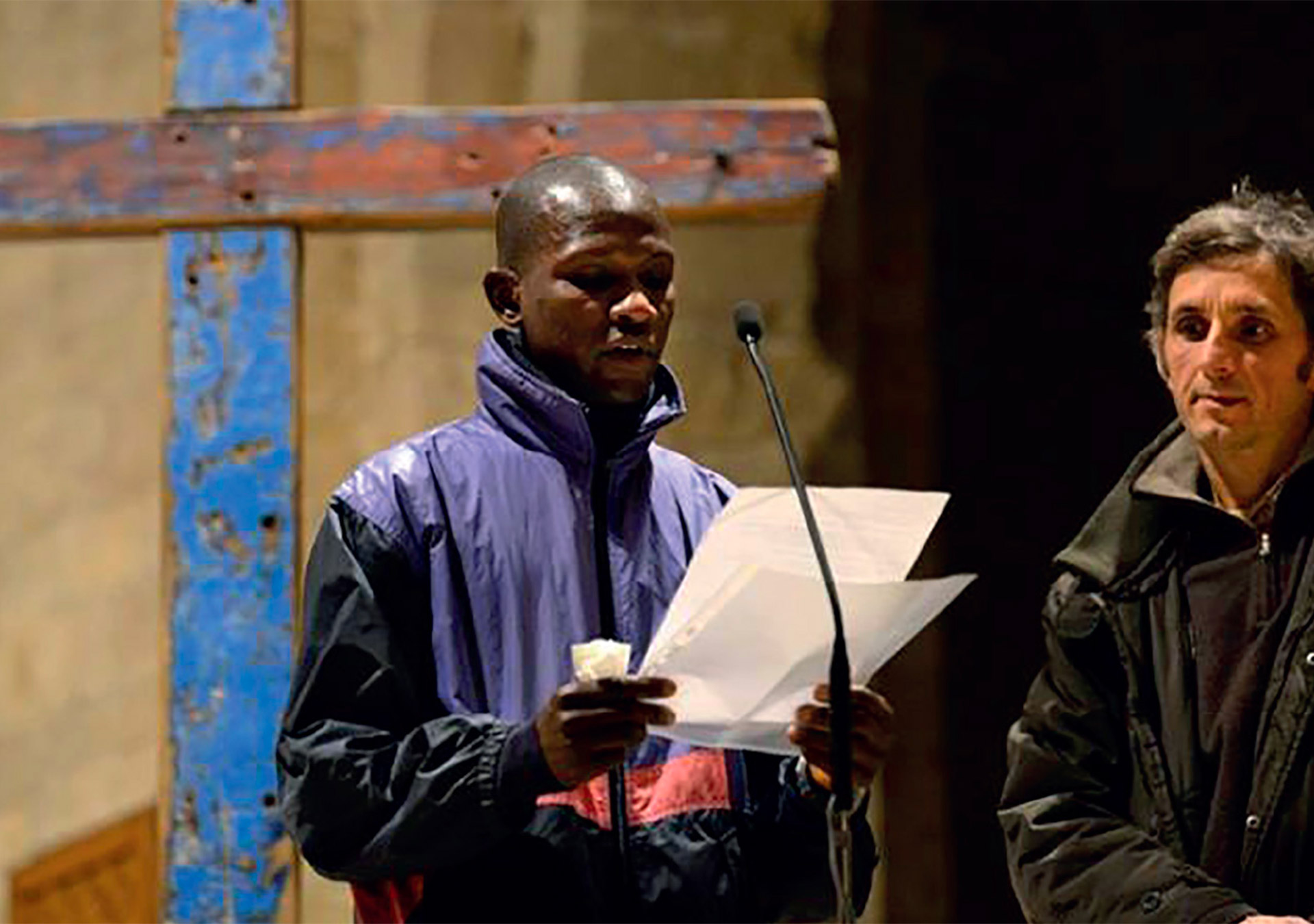 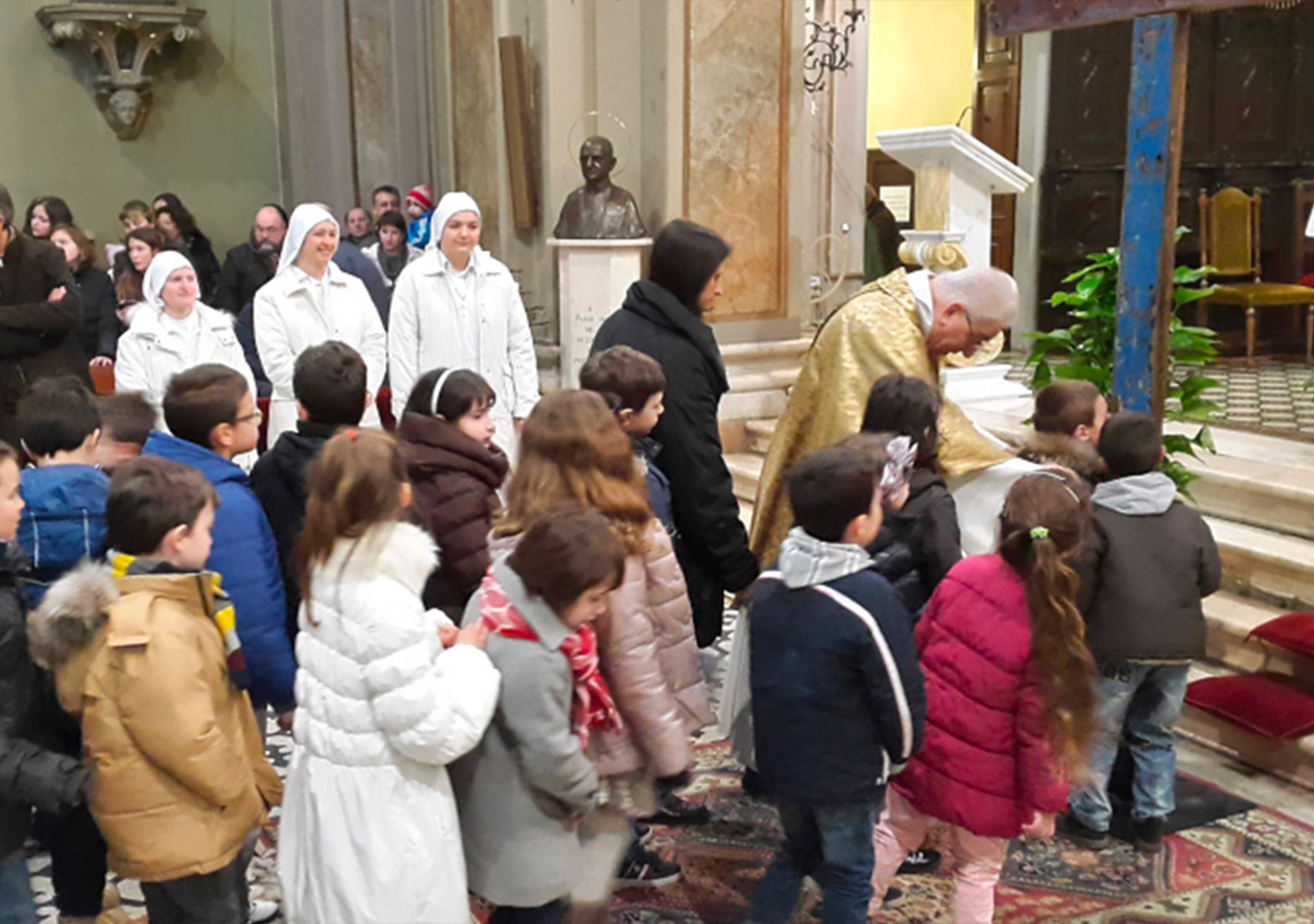 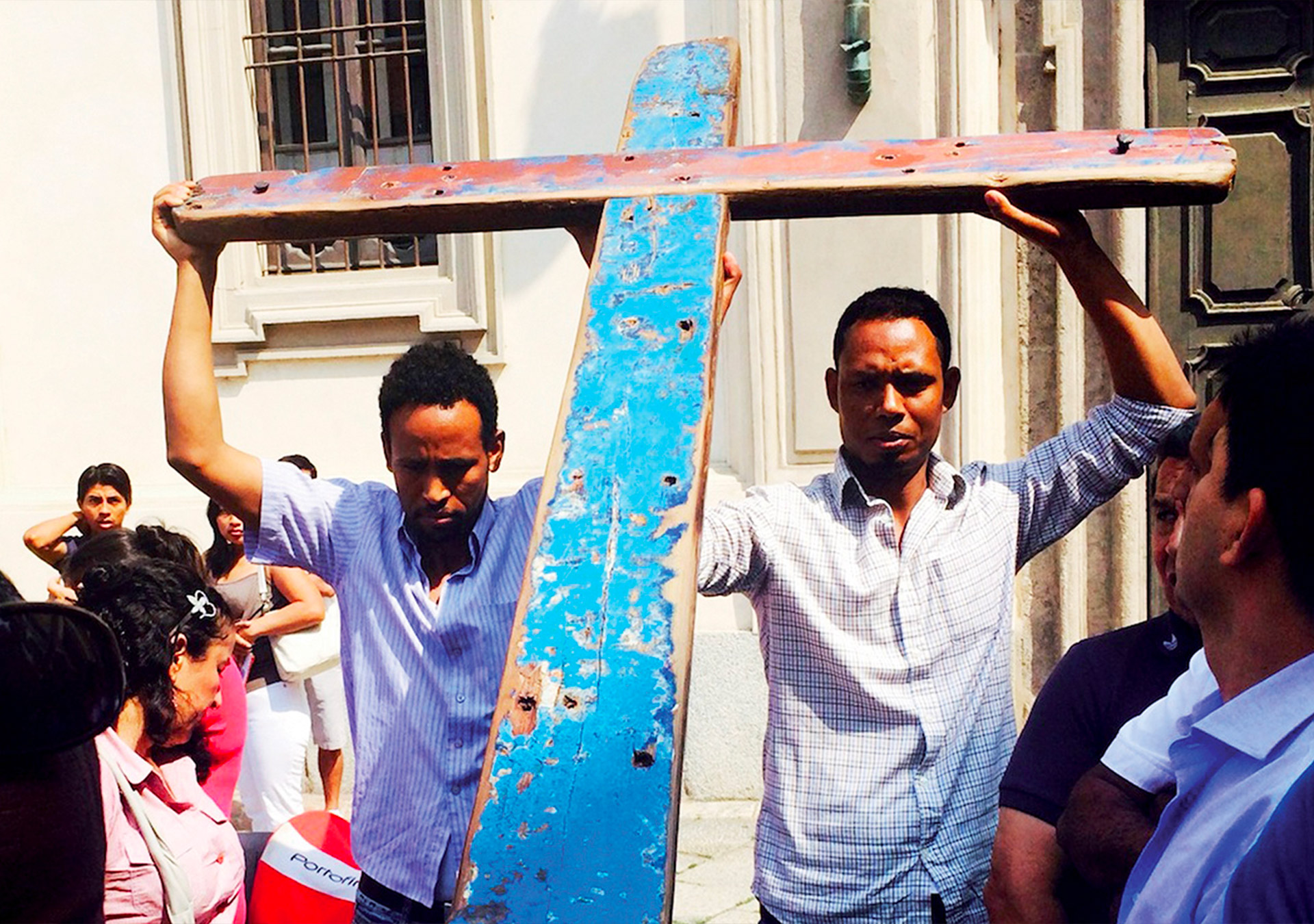 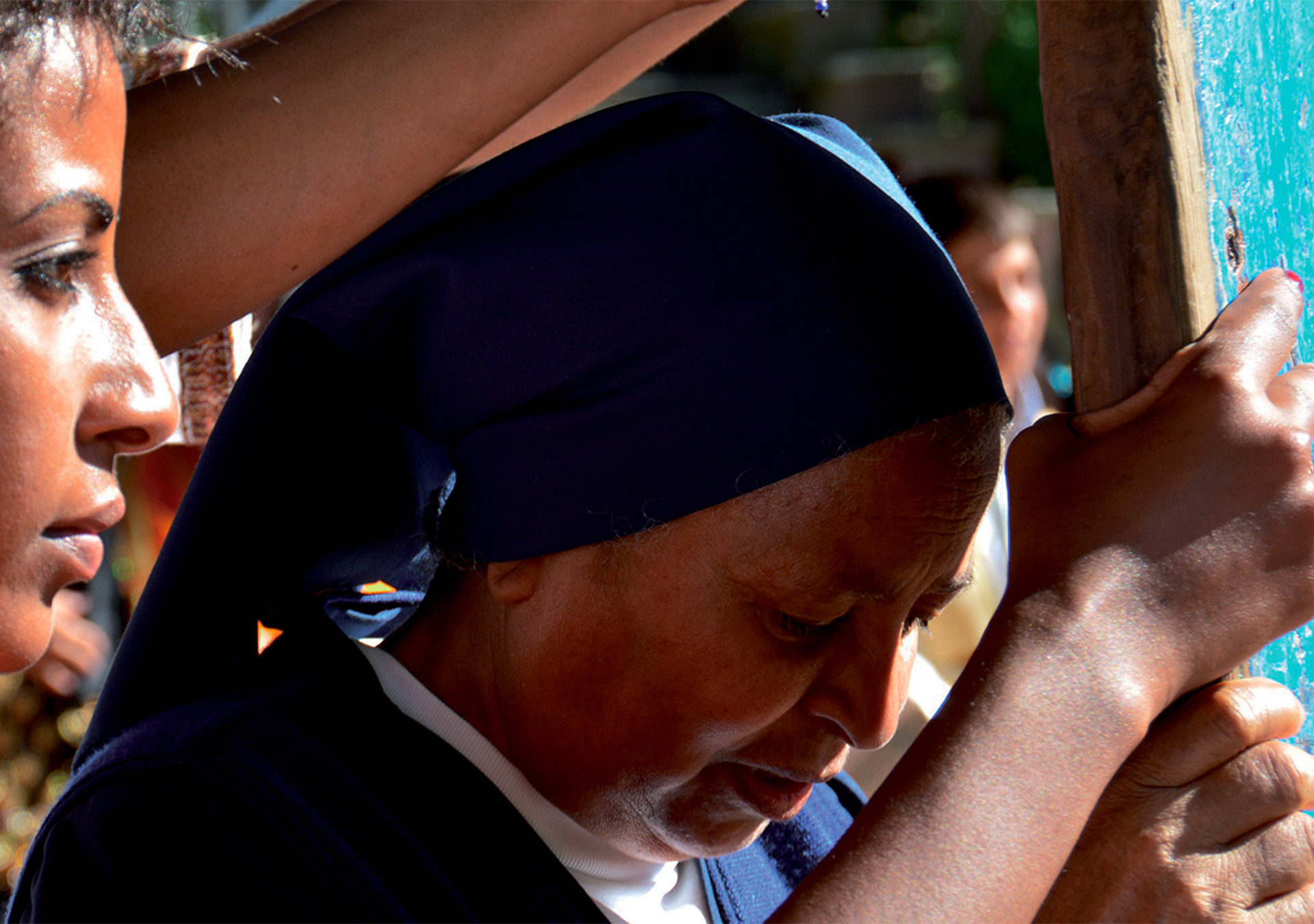 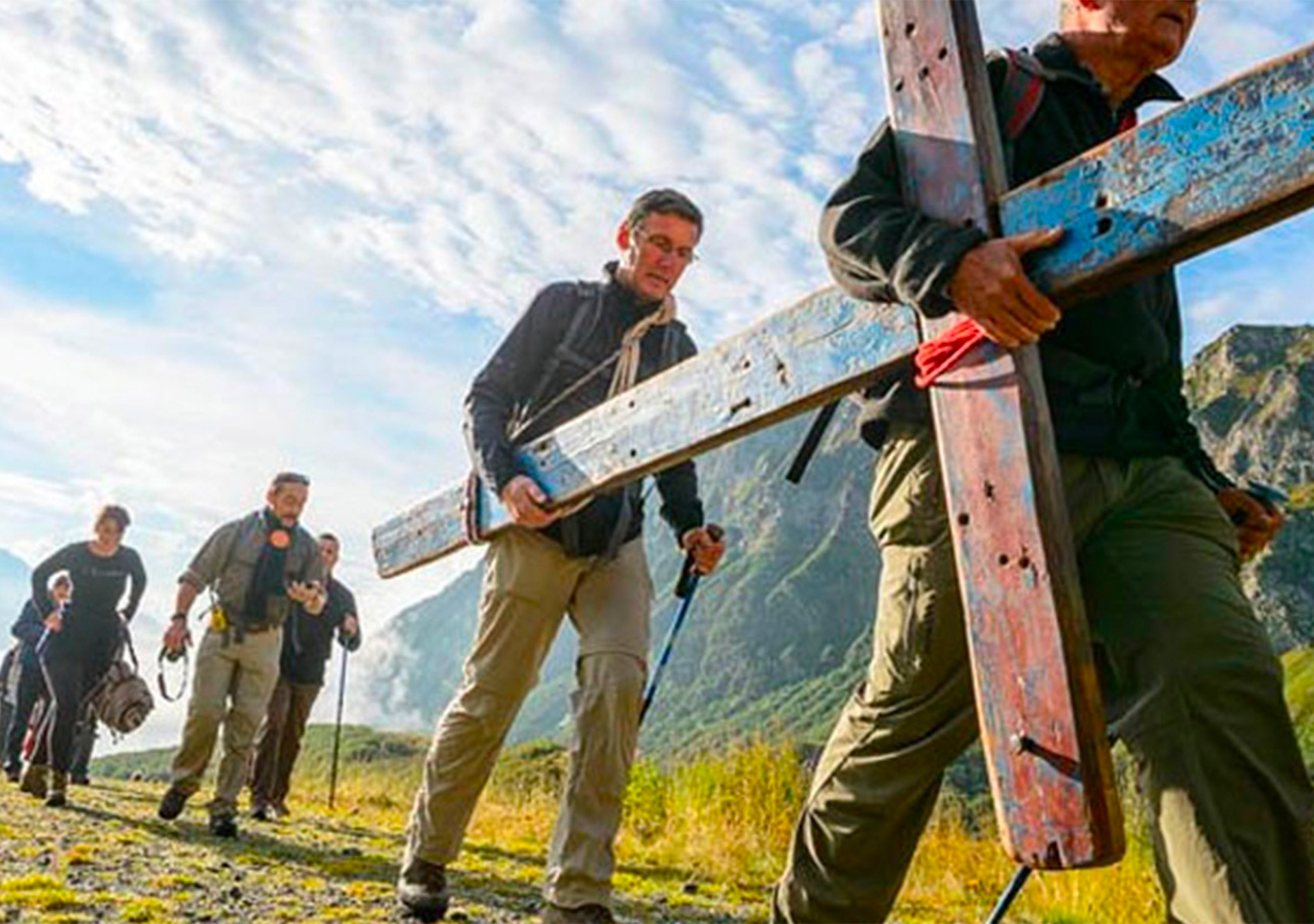 what can you do

With your support, the Cross of Lampedusa will travel the world as a testimony of humanity on the run and of inviolable dignity of every human being